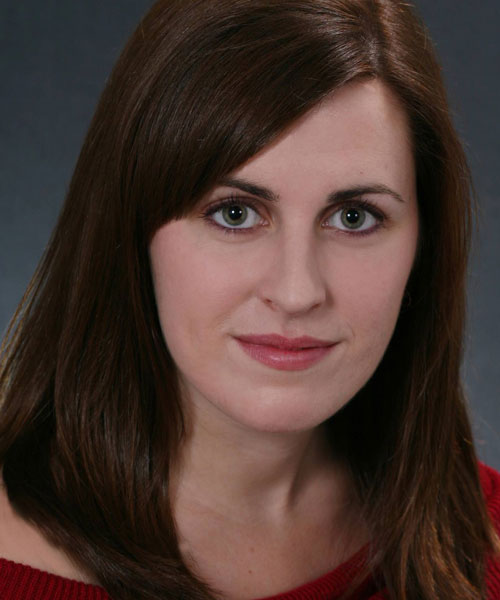 Dr. Erin Plisco is the Associate Director of Choral Studies at Missouri State University, where she helps lead a comprehensive choral program of over 300 singers, conducts multiple choirs, and teaches undergraduate and graduate choral conducting and literature. She is a frequent guest clinician and presenter across the United States and abroad, and enjoys working with choirs of all ages. She also continues to maintain a career as a professional ensemble soprano, performing with choirs across the Unites States. Plisco currently serves as the SSAA Repertoire & Resource Chair for both the Southwestern division and the Missouri chapter of the American Choral Director’s Association. Upcoming engagements include presentations at the American Choral Director’s Association National Conference and the Oxford Conducting Institute International Conducting Studies Conference.

Plisco holds a Doctor of Musical Arts in choral conducting from the University of Arizona, where she studied conducting with Bruce Chamberlain and voice with Elizabeth Futral. She studied at Trinity College, University of Cambridge (United Kingdom) for the Master of Music in Choral Studies, where she was a recipient of the prestigious Gates Cambridge Scholarship and studied with Grammy-nominated conductor Stephen Layton. She holds a Bachelor of Music degree in Choral Music Education and Vocal Performance with a minor in Leadership Studies from Christopher Newport University.

Plisco has conducted choirs of all ages, most notably serving as the Director of Choral Studies at Pinecrest High School (Southern Pines, N.C.). Under her direction, the choirs received numerous awards at national festivals and competitions, performed by invitation at the NCMEA State Conference, and her chamber choir was the winner of The American Prize for high school choral ensemble performance in 2013. She also contracted and hosted Grammy award-winning composer Eric Whitacre for a residency at the school.

Recent positions have included directing ensembles at the University of Arizona and East Carolina University, and serving as assistant director for the Tucson Symphony Orchestra Chorus and True Concord Voices & Orchestra (a professional ensemble based in Arizona). Plisco also recently served as visiting conducting faculty for the three-summer Masters of Music in choral conducting program at Simpson College. She is a past recipient of the Colleen Kirk Award, given by the ACDA Southern Division in recognition of her outstanding achievements as a young conductor, and has spent three summers as a choral fellow with the Yale School of Music-Norfolk Chamber Music Festival in Connecticut, under the direction of Simon Carrington.