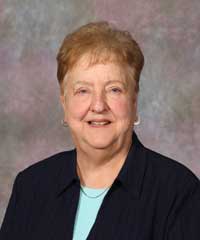 Rose Mary Owens, Professor of Music at Missouri State University, received her BM Music (Voice) degree from Pittsburg, Kansas, State University, her MA and Ph.D. degrees from the University of Missouri-Columbia, and holds two licentiate degrees from the Royal Academy of Music in London, England. During her student days at the Royal Academy and on several other occasions in the succeeding years, she studied voice with the Dame Eva Turner, internationally acclaimed prima donna, dramatic soprano, and teacher. Her other voice teachers and coaches have included Judy Bounds Coleman, Harry Morrison, and John Street. She has sung as a soprano soloist in numerous oratorios and operas. Representative performances include Handel's Messiah; Bach's Mass in B minor Faure's Requiem ; Puccini's La Boheme , Suor Angelica, and Tosca ; Britten's Albert Herring ; and Mozart's Cosi fan tutte. Additional roles she has sung in recent years with the Springfield Regional Opera include Zita in Puccini's Gianni Schicchi, Mother in Offenbach's Tales of Hoffman, Miss Todd in Menotti's The Old Maid and the Thief, and Katisha in Gilbert and Sullivan's The Mikado. She has assumed an active role in preparing soloists and choruses in Missouri State productions of Cavalleria Rusticana, Bluebeard's Castle, Tosca, Albert Herring, Carmen, Die Walkure, The Consul, Down in the Valley, Suor Angelica, and Die Fledermaus. Dr. Owens has also been active in varying capacities in community and university musical theatre productions. She has performed the role of Abigail Adams in 1776 and the Mother Abbess in The Sound of Music with Springfield Little Theatre. At this active venue, Dr. Owens has served as vocal music director for The Mystery of Edwin Drood and music director/conductor for productions of Oliver, Camelot, Student Prince, South Pacific, 110 in the Shade. On our campus, Dr. Owens has sung the role of Ruth in Pirates of Penzance as a guest artist, and has served as music director/conductor for the Threepenny Opera and vocal music director for Strider, On Your Toes, Kiss Me Kate, and Pippin. At Missouri State, Dr. Owens teaches courses in Voice, Singing Diction, Song and Opera Literature, Vocal Pedagogy, and Introduction to Music. She frequently serves as a vocal clinician in area high schools, and as an adjudicator in music festivals and competitions throughout Missouri, Oklahoma, and Texas. During 1994-95 she spent a Sabbatical Leave serving as an invited Foreign Educational Expert and Visiting Professor of Music at Northwest Normal University in Lanzhou, Gansu Province, People's Republic of China.